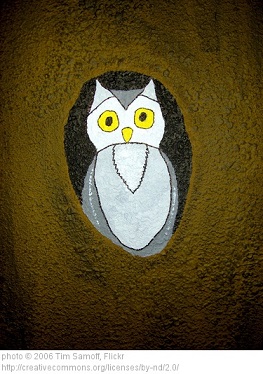 An owl is seen as a symbol of wisdom in American culture.  Owls have an ability to see in the dark three times better than humans can.  Because of their ability to “see”, they hence can metaphorically perceive truth.  If an owl shows up in your dream, it may be trying to help you to realize something that you are not currently seeing in your life.

An owl may alert you to pay attention to a message that is being given in your dream that you might otherwise disregard.  It may be something that you wish was not true, but disregarding the message will not make the truth of it change!

One man saw an owl in his dream while he watched someone in his life betray him in the dream.  He never would have suspected that this person would not be loyal to him.  He later found out that what he was dreaming about this person was, in fact, true.

As with all dream symbols, what you associate with the symbol will determine the meaning of it.  During the Middle Ages, the owl was associated with witchcraft, darkness, or impending death.  Culture, therefore, plays a huge factor in determining what dream symbols mean.