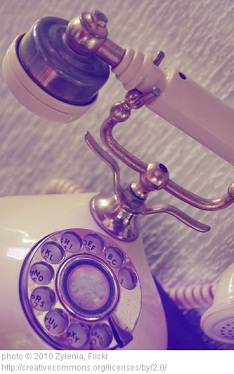 One day I was struggling and didn’t know what to do.  My best friend, who was living far away from me, was unavailable to talk.  I wished so much that I could speak to her in this moment.  She always gave me good advice because she understood my needs.  I went to bed that night longing to speak with her.

That night I had a dream.  In the dream all of my things were falling apart.  My household items, my car, everything was breaking.  In the dream I felt so desperate.  Then suddenly I found myself in the middle of a telephone conversation with my friend.  I could hear her voice and she was telling me something very strong and specific for me to do.

Amazed that we were speaking, I asked her if she had known to call.  It wasn’t unlike her to just know when I needed her during times of hardship.  But instead the conversation went dead.  The telephone was cut off and I was left with that one, specific, powerful message.  I received what I needed to hear from her, and then it was done.

So clever is the symbol of a telephone.  It captures the dreamer’s attention and helps her to understand that something very important is being communicated.  Clear words being spoken by a voice directed solely at the listener … what a powerful way to ensure that the message is heard!

In his book, “Finding Meaning in Dreams: A Quantitative Approach”, G. William Domhoff includes some experiences of those who had dreams of telephones in communication with their loved ones who had died.  One woman describes her experience:

After my grandmother died, I felt terrible … The first thing I thought of when I was told of her death was that I didn’t get to say good-bye or tell her that I loved her.  For two months after her death I was tormented by guilt and anger over not saying how I felt to her.  However, one night I dreamed that I was awakened by a phone ringing in the hallway upstairs in my house.  I got up out of bed and went to answer the phone.  As I picked up the phone, the dark hallway I was standing in became fully illuminated.  I said “hello” and my grandmother’s voice said “Hello, Sally, this is grandma.” I said “Hi, how are you.” We spoke for about 10 minutes until we were ready to hang up.  Finally, my grandmother said she had to go.  I said, OK Gram, take care, I love you.”  She said “I love you too, good-bye.”  I said “good-bye.”  As I hung up the phone, the illuminated hallway became dark again.  I walked back to bed and fell asleep.  When I awoke (for real this time) the next morning, and ever since then, I have been at peace with my grandmother’s death.

In his book, G. William Domhoff states that in research that was conducted by Deidre Barrett, 53% of the dreams that fell in the category of discussion about death involved telephone calls from a deceased person.  “In short, Barrett’s analysis suggests that the telephone may be a metaphoric way of expressing abstract communication in American culture.”

Pick up your telephone.  Look at it.  Study it.  Now, pretend that you are the telephone.  Think about what it feels like to be this instrument.  If the telephone could talk to you, say anything that it wanted to you, what would it say?  Say the words out loud … say any and everything that comes to your mind without stopping to think.

Example:  “I, Mr. Telephone, am here to tell you that I want you to listen more.  You need to listen more to what your feelings are expressing because you haven’t been listening to them enough lately.”